Did you know you could do a PhD on dingoes? Dr Mike Wysong has spent his career working for positive conservation outcomes in America and Australia. He’s also our newest Program Manager at South Coast NRM and we’re thrilled to have him! Whether he’s addressing feral cat populations or investigating Polynesian plants, Mike has learned that there’s one factor that makes or breaks conservation projects: collaboration.

As part of our Biodiversity team, Mike’s focus will be on the South Coast region’s Regional Land Partnerships investments in threatened species and threatened ecological communities as well as Project Dieback and the Carnaby’s Cockatoo Environment Restoration Fund project.

Mike and his family have just arrived in the Great Southern, having spent the last four years in Broome. As the Indigenous Protected Area Coordinator for Nyamba Buru Yawuru, Mike worked with Traditional Owners on conservation projects in Yawuru land in the Kimberley. The organisation works to promote conservation and regeneration on Country using both traditional and modern knowledge and methods. Mike is proud of the culturally and scientifically sound work he supported during his time at Nyamba Buru Yawuru.

Mike’s new position at South Coast NRM appealed to him thanks to his familiarity with Rangelands NRM in Western Australia’s north. Bringing together pastoralists, community members, fire services, and government departments, Mike’s work with Rangelands NRM harnessed the power of consultative collaboration. It also bolstered his commitment to  finding common ground on conservation projects.

Mike’s focus on relationship building is strongly aligned with the way we operate at South Coast NRM. Our relationships with community groups, government departments, local businesses, and land managers are a big part of how we plan and execute projects. After all, looking after 8.6 million hectares of land takes a village — and we’re so pleased to have Mike as part of ours.

But what about the dingoes?

In 2016, Mike completed his PhD at the University of Western Australia. His study of the interaction between dingoes and feral cats on Martu land in Central WA examined the relationship between the two species. Not only that, he investigated their numbers and their effect on land and land management. Finally, Mike made recommendations for the management of dingoes in the Gascoyne-Murchison region on the basis of both pastoral and conservation goals.

Stay in the loop

If you’d like to know more about South Coast NRM — like who we are, what we do, and some of our current projects, there are a few ways to do it. Signing up to our e-news is a great way to stay informed. You can also check out our blog, or hang out on Facebook and Instagram. 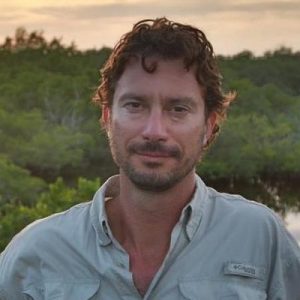