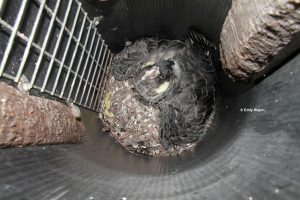 A full-grown Carnaby’s black-cockatoo chick looks up from the safety of its ‘cockatube’. Two chicks were hatched and successfully raised by their parents in artificial nesting hollows placed in remnant bushland near the Stirling Range this summer.
Eggs laid in a third cockatube on the same property were taken – most likely eaten by a lizard or brush-tailed possum – just one of the hurdles these endangered birds face in their fight for survival. They must also compete with other birds and feral bees for breeding hollows.
Carnaby’s black-cockatoos – found only in Western Australia’s south-west corner – mate for life and will raise one chick each summer, if conditions are favourable. These chicks were found at one of 12 sites being monitored by South Coast Natural Resource Management Inc. black-cockatoo project officer Sandra Gilfillan, from west of Cranbrook to east of Ravensthorpe.
The project aims to improve fledgling survival rates and habitat at black cockatoo nesting and feeding sites in the south coast region. Sandra is working with private landholders to regenerate remnant vegetation, control stock access, control invasive weeds and pests and install or repair nesting hollows.
“Some of the landholder participants know that the Carnaby’s are around, but they haven’t been building nests. This project will support works to protect and enhance feeding areas in land adjacent to known breeding sites,” Sandra says. “Close to the Stirlings we know there is plenty of feeding habitat, but at other sites we will be planting species like banksias and hakeas that we know cockatoos like to feed on.”
This work is supported by the Australian Government through the National Landcare Program.
Photo by Eddy Wajon