Western Australia’s south coast is best known for its pristine white sand beaches and aquamarine waters. But behind the dunes a network of lakes, inlets and wetlands stretches from east of Esperance to the Walpole Wilderness in the west. South Coast Natural Resource Management is helping deliver projects at wetlands of national and international significance across the region; bringing people together to protect these precious resources for future generations.

In the east, lakes, and wetlands in and around the town of Esperance are recognised as Ramsar sites of international significance. Lake Warden, just north of the Esperance townsite, and Lake Gore, 35km west, are each listed under the Ramsar Convention – their waters and wetlands visited by thousands of shorebirds who follow the East-Asia/Australasia flyway to feed on the south coast mudflats each summer. The wetlands are also home to one per cent of the global population of hooded plover.

South Coast NRM are halfway through a five-year program supporting the Esperance community and project partners deliver targeted rehabilitation works within the Lake Warden and Lake Gore catchment. Fencing around 15km of wetlands and remnant vegetation, 50ha of weed control and 10 fox control events have helped to protect existing habitat, while 55ha of revegetation and 378ha of woody and herbaceous ground cover will improve biodiversity with time. Community and landholder shorebird monitoring surveys complement work done by BirdLife Australia and the Department of Biodiversity Conservation and Attractions ‘Parks and Wildlife’ science team each year. The local community are actively involved in many of these activities through regular workshops and field days – 38 at last count!

Further west – a stone’s throw from the township of Manypeaks near Albany – Lake Pleasant View, known as Ballogup to local Menang people, is home to populations of Australasian Bitterns and western ringtail possums – both threatened species. South Coast NRM ecologist Bronte Van Helden heads out with her spotlight for night possum-surveys each season, while BirdLife Australia have installed acoustic recording units to monitor the reclusive bitterns. “We have done the baseline surveys,” Bronte says. “Our partners are delivering cat trapping and fox baiting out there. And then we will start monitoring the change.” Fauna monitoring and introduced predator control are funded through the Australian Government’s National Landcare Program.

A small freshwater lake flanked by a natural granite amphitheater, Ballogup has been a traditional meeting place for the Menang people for millennia. Archaeological surveys have found fragments of burnt turtle shell in a rock shelter’s fire hearth, a scar tree, gnamma holes and widespread rock scatter around the lake, with further surveys happening this month.

The Albany Heritage Reference Group Aboriginal Corporation owns and manages a 7ha property adjoining the lake and are important partners in cultural surveys and rehabilitation works including weed control, revegetation, and fencing. Indigenous contractors are engaged to work on site whenever possible. Local schools are now visiting to learn about land and culture on country with Menang Elders, connecting a new generation with this ancient and sacred place. 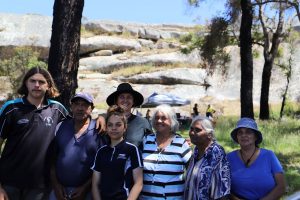