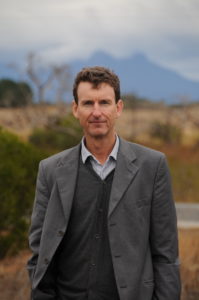 Richard was awarded the title of 2020 South Coast Soil Health Champion at the recent Talkin Soil Health Conference in York because of his long-term commitment to improving soil health.

“For us it was about choosing a Soil Health Champion who is an inspiration to those around them. A champion embodies the principals of sustainable agriculture and has a strong drive to improve the health of their soils. They are the farmers of today who will influence our farmers of tomorrow.  Richard definitely meets the criteria with the work he’s been doing” said Mr David Broadhurst, Land and Water Program Manager with South Coast NRM.

Farming for more than 20 years, Richard manages a 5000-acre organic certified cattle operation in Wellstead. His farming focus has been on quality food production without degrading his farming system and soil resources.  Richard makes his own biological fertiliser to replace synthetic fertilisers and build up his soil biology.

He has also been very generous with his learnings, hosting workshops annually to showcase his efforts to other farmers both locally and from around the world.  Richard freely shares what he knows and highlights his failures and successes equally.

“Richard was an obvious choice as our Soil Health Champion. He has demonstrated his long-term commitment to improving his soils through a range of methods.  All whilst remaining profitable.” Said Mr Broadhurst.  “Added to this, Richard is very committed to sharing his knowledge and skills with other farmers”.