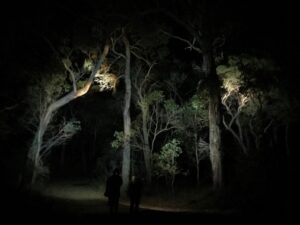 Bats flit silently overhead as ecologist Bronte Van Helden slips on her headtorch and tests her spotlight in the gathering dark.  It’s quiet at this roadside stop east of Albany. The trucks and cars that normally ply Highway 1 have been diverted north of Manypeaks, leaving only the occasional farm ute to break the stillness.  Sheep bleat in the dry paddock across the tarmac as the twilight fades and Bronte directs her torch-beam into the treetops. She is looking for eyeshine from one of Western Australia’s most critically endangered species – the western ringtail possum.

Once widespread across the State’s south west corner, the nocturnal marsupials’ range has now largely contracted to three known areas: the western coastal strip from Mandurah to Augusta; marri and jarrah woodland surrounding Manjimup; and the south coast from east of Walpole to west of Bremer Bay – although sightings that far east have been unconfirmed in recent years. The possums living here at Ballogup/Lake Pleasant View – and those down the road at Waychinicup National Park – may now represent the eastern-most edge of the species’ range.

Bronte has just submitted her PhD thesis, the culmination of three years monitoring Western ringtail possums and other backyard visitors in suburban Albany. Stepping straight into the role of ecologist with South Coast Natural Resource Management, Bronte is now keeping a close eye on ringtail possums across the south coast region. She will visit Ballogup for three consecutive nights each season, walking the same transect of bushland each time.

Motion-sensor camera traps record predators such as foxes and feral cats which use tracks as hunting corridors, but spotlight surveys are still the main method of monitoring nocturnal tree dwellers. Keeping Bronte company tonight is her PhD supervisor Dr Paul Close, a lecturer and researcher at the University of Western Australia’s Albany Centre. Standing a foot taller than Bronte, his torch-beam sweeps to the left of the trail while Bronte shines her spotlight to the right. They don’t usually look down, and Paul wryly recalls the time he stepped on a tiger snake and had his boot sprayed with venom.

A crescent moon hangs in the western sky as we round the granite outcrop at the heart of this registered heritage site, now owned and managed by its traditional Menang custodians. Ballogup has been an important Noongar meeting place for millennia and is home to two threatened species. As well as the ringtails, Australasian Bitterns’ booming calls are still heard coming from the freshwater lake at the property’s northern edge.

We’re climbing the hill back to the highway when Bronte spots her first possum for the night – a glimpse of orange eyeshine through the branches giving away its perch high in a marri in the bush on Paul’s side of the track. “I would never have seen that one,” he admits, proving the rule that two sets of eyes are better than one. The possum seems nonplussed by our presence as Bronte steps off the path for a closer look and Paul records her observations on his clipboard.

This project is supported by South Coast NRM, through funding from the Australian Government’s National Landcare Program.