Skip to navigation Skip to content
Home/News/It’s that time of year for malleefowl!

It’s that time of year for malleefowl!

As the days heat up some of the country’s most elusive birds are beginning to emerge from their nesting mounds in the Great Southern. Rarely sighted and almost perfectly camouflaged, malleefowl chicks hatch within the warmth of up to 5m3 of composting leaf litter, pushing their way through up to a metre of soil before finding their way to the light of day.

South Coast NRM ecologist Hannah Bannister has been monitoring the region’s active nesting mounds for the past 18 months. Pregnant with her first child, Hannah has hiked kilometres through thick scrub in the dry interior to check for signs of recent activity.

“It is pretty exciting when you find an active mound,” she says. “They will be nicely shaped and freshly scraped. But you don’t often see malleefowl when you are doing it.”

The only time Hannah has spotted a malleefowl in the wild was from her car when driving up north in the Shark Bay region, but she has caught more than a few on camera from the camera traps distributed around the region’s known nesting mounds.

Malleefowl distribution has declined by up to 30 per cent in WA over the past 40 years due to land clearing, grazing, predation by cats and foxes and wildfires. Left to fend for themselves from the moment they hatch, many chicks will succumb to predators or starvation in their first weeks of life. But with the region home to one of the country’s healthier populations of this very special bird, South Coast NRM hope to increase the chicks’ chances of survival through revegetation, habitat protection using fencing, and fox and cat control.

Another 30 camera traps scattered throughout the region are helping provide data for a national research program examining the benefits of fox control on malleefowl populations. Aerial laser surveys using LiDAR remote sensing technology identified potential nesting sites which were then checked at ground level. These mounds are now included in annual monitoring surveys.

While it may take some years for plants to grow and vegetation to recover, Hannah is hopeful of seeing signs of improvement by the project’s end. She will soon be welcoming her own baby into the world and hopes to share a glimpse of a mysterious malleefowl with them one day. 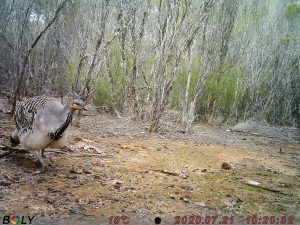